The C3E invests 350 000$ in Effenco inc. to support the commercialization of its Active Stop-Start Technology

Home/Highlights/The C3E invests 350 000$ in Effenco inc. to support the commercialization of its Active Stop-Start Technology

The C3E invests 350 000$ in Effenco inc. to support the commercialization of its Active Stop-Start Technology 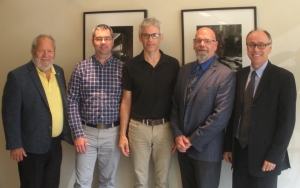 The Centre of Excellence in Energy Efficiency (C3E) invests 350 000 $ in EFFENCO inc. for the commercialization of its Active Stop-Start Technology. Involved in the market for almost 10 years now, EFFENCO enjoys a very strong reputation in both the institutional world and the vocational heavy vehicles industry. The garbage collection vehicles, fuel delivery vehicles and the terminal tractors will be the primary market for 18 to 24 months ahead.
According to the CEO of C3E, Donald Angers, “C3E’s investment in Effenco will accelerate the introduction of this technology in growing markets that favor the reduction of emissions of (GHG). While reducing their cost of operation and maintenance, vehicle fleet users equipped with the Active Start-Stop Technology will be less and less perceived as major polluters, but more like entrepreneurs concerned about the protection of their environment” adds the latter.

“ Effenco’s primary objective is to become the global leader in energy management systems for vocational heavy vehicles, enabling to reduce a 20 to 30 percent of their fuel consumption and associated GHG emissions without compromising productivity, operability and driver comfort. Europe and North America represent a potential market of 180,000 units per year, while Asia represents 200,000, a combined market worth of $ 5 billion. The short-term challenge is to build the distribution and service network in the United States and Europe” says Effenco’s CEO, Colin Ryan.